Do versus Jutsu; Round 3 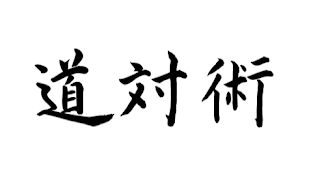 I’ve written before about the idea of DO versus the idea of JUTSU. Since the subject keeps coming up as a topic of discussion and debate, I’ll revisit the argument and hopefully have something new to say about it.  To begin with, what is a do 道 and what is a jutsu 術? What makes them different or similar?

Non-Japanese keep trying to make jutsu and do into important concepts, such as saying that do is a “way” or “path” for spiritual development and the jutsu is for combat, or that jutsu is for battlefield arts and the do is for peace time arts and sports. When you try to explain these categories to native Japanese, they just shake their heads in wonderment that anyone could come up with such a thing. The concept of do is quite a bit older than the martial arts in Japan.  In fact, it’s quite a bit older than recorded history in Japan. Scholarship shows all the ways DAO道 (the Chinese pronunciation for do 道) was conceived of and argued about in ancient China a thousand years before there was a written language in Japan.

Interestingly, the Kodansha Online Dictionary lists this meaning for jutsu 術 as "a means; a way." So if jutsu means "a way" and "do" 道 is a way, then what really is the difference? The truth is there isn't one in this area. I've seen great classical swordsmen use the terms "kendo" and "kenjutsu" interchangeably in the same paragraph. I know some lines of Muso Jikiden Eishin Ryu that call themselves iaijutsu, and others that call themselves iaido. What is the difference between the two?  They are the same art, the same syllabus, the same kata; just different suffixes added to "iai" (which by the way, is perfectly capable of standing alone without any suffix; just as one of the popular names for jujutsu 柔術 and judo 柔道 was yawara 柔,without any suffix at all.

Let me add a quick aside here. As Michael Hacker, the author of The Language Of Aikido, has pointed out, jitsu じつ (実) isn't a term that is related to this conversation. It's the result of a mis-transliteration of the correct suffix "jutsu" 術.

One of the greatest, most refined, and storied martial arts in Japan, with a history going back more than 450 years and still going strong, doesn’t use either suffix, yet it’s famous for the depth of its philosophy and the writings of various headmasters. Yagyu Shinkage Ryu Heiho 柳生新陰流兵法.”Heiho” means strategy or tactics. I don’t think anyone would argue that Yagyu Shinkage Ryu Heiho is not a sophisticated system that aims to develop not just skill with the sword, but a better human being as well. Shouldn’t its name include 道 then? Only if you’re a pedantic gaijin (foreigner). Do 道 and jutsu 術 are not meaningful categories in Japanese language.

A do is a way of doing something; and a jutsu is also a way of doing something. There are many ways of expressing this in Japanese. Across the 500 years or so that various forms of bugei (warrior arts) have been practiced in Japan and around the world, a lot of different terms have been used to describe martial arts. There have been lots of words used to describe other practices that are seen as “ways” as well. Tea Ceremony was known as Cha No Yu for centuries, long before the description “sado” (Way of Tea) was applied to it.

Practicing bugei is a journey, not a destination.  This is a cliché, but one that is true. When you begin training, all of your focus is on the physical skills. It takes all your concentration just to follow what sensei is doing and produce a rough approximation of the technique or kata that is being shown. Later, after you have internalized the movements, you begin working on the mental aspects of training. I used to think that Kodokan Judo was obviously better than classical jujutsu systems such Yoshin Ryu or Tenjin Shin’yo Ryu because Judo, being a “do” art, was obviously more philosophically sophisticated than simple jujutsu systems that predated it. Being a do, I assumed that it must have a more principle-based curriculum than any mere technique based jutsu.

I was also an arrogant idiot. The idea that Judo is more sophisticated or superior to Tenjin Shin’yo Ryu or any of the various styles of Yoshin Ryu just because it has the suffix “do” in its name is ridiculous. It’s as silly as saying that Aikido is clearly superior to Daito Ryu because Ueshiba made his art a do and Takeda didn’t. None of these arts is superior to any other because of the name or what the art emphasizes. I have real trouble with the idea that any bugei art is superior to any other. All of them have strengths and weaknesses. What makes an art superior or inferior is how well suited it is for a particular situation or person. For a philosophically minded kid such as myself, Judo and Aikido were great arts.

For someone whose primary interest is physical skills, then arts with too much talking about the philosophy won’t be suitable. Arts are superior for what they can do for their practitioners, not because they are better for learning fighting techniques. Who is going to make the call as to whether Ono-Ha Itto Ryu or Yagyu Shinkage Ryu is the better art?  Better for what? The only question where “better” should show up is in “Which art is better for me at this time and place?” That’s the only “better” I can think of being at all meaningful.

I’ve got more bad news for folks on all sides of the do versus jutsu discussion. You can’t make real progress in any art without both the physical skills and the mental/philosophical development. The nice thing about bugei is that they are lifelong studies. You never cease learning new things from them. I do Shinto Hatakage Ryu Iai Heiho, a style of swordsmanship which has only 22 kata in the curriculum. I’ve been studying it for more than 22 years. You might think that with more than a year of study for each kata I have learned all there is to learn about them and I am bored with them. You would be wrong. The individual kata still teach me things about movement and balance and how to optimize my physical self. I also learn more about quieting, controlling and directing my mind and my self.  Some days practice is all about the physical techniques. I’m not sure I will ever fully master the chudan kata Tobi Chigai. Other days are all about the mental state. I’m sure I will never fully master my self.

I don’t know of any bugei that has come from Japan that has not been heavily influenced by the concept of do or michi 道。The concept permeates the culture so thoroughly that it is inescapable. There are even a number of styles of soujido (掃除道 - that’s housework, folks!). Arguing over whether something is a do or jutsu makes no sense. If we have time to argue about this, we aren’t practicing enough. We’re much better off spending more time practicing the particular bugei that is best for us where we are.


Disputers of the Tao by A. C. Graham, 1999, Open Court Publishing - this looks at not just the Daoist idea of the way, but also how Confucius, Mozi, and many others conceived of the Way in ancient China.

The Language of Aikido: A Practitioner's Guide to Japanese Characters and Terminology by Michael Hacker, 2017, Talking Budo. Hacker does an excellent job of introducing the multifaceted world of Japanese characters and language, and how it all serves to enhance, and sometimes confuse, our practice of Japanese martial arts.


Posted by The Budo Bum at 7:30 AM No comments: Links to this post