Etiquette: Form and Sincerity In Budo

For a lot of people outside Japan, Japanese reishiki  or etiquette seems quite heavy, stylized and empty. There is so much of it in Japanese life that people who live in a low etiquette society such as the US assume that it must be just empty motions that don’t do much other than to make the people at the  top feel feel good about being at the top. Japanese groups appear to move in scripted scenes that don’t leave any room for human feeling and individuality.


This isn’t quite true, but it does take a little while to get familiar enough with how things are done to be able to read what is being done and said through the language of etiquette. Traditionally in Japan, and by this I mean during the Tokugawa Period (roughly 1600 - 1868), much of life was strictly controlled and people worked very hard to make sure they behaved within well known and carefully ordered norms. Getting your etiquette right was critical. It could quite literally be a matter of life and death.


Lord Asano was being instructed in proper Edo court etiquette when he lost his temper, drew a dagger and attacked the instructor, Yoshinaka Kira, setting in motion Asano’s sentence to commit seppuku and his retainers on the path of vengeance that led to Asano’s death and their immortalization in the tale of the 47 Ronin.  Getting the etiquette right was that important. One version of the events holds that it was because Asano felt he was not being properly instructed that he became angry. Whether this is true or not, the fact that it was plausible enough for people to accept it as motivation shows how critical etiquette was.


Thankfully, people in Japan don’t place quite as much importance on etiquette as they did in Asano and Yoshinaka’s time, but it is still extremely important, and people watch how others practice their etiquette quite carefully. Now it is about expressing respect, giving courtesy and honoring people, places and practices.


In the dojo the formal etiquette serves several purposes beyond just the social. It provides structure, a clear understanding of proper behavior, a means of expressing respect and appreciation, and a way of maintaining a safe training environment, among others. While there can be quite a bit of variation in etiquette between various martial arts, and even between dojo that practice the same art, it’s not that difficult to understand the basics. Etiquette is really about expressing respect for people and ideas.


We take off our shoes and bow when we enter the dojo.  This shows respect for the art that is practiced in the dojo and maintains the basic function of keeping the floor clean and minimizing the amount of time required to clean it.  The dojo is a specially designated space for practicing arts that teach horrific combat skills while also refining students minds and bodies. The bow shouldn’t be tossed off like it’s a bothersome requirement.  It’s a chance to show that you appreciate the art, the person who is teaching it to you, and your fellow travellers on the path that enable  your learning by offering themselves as training partners, as well as your respect for the seriousness of what you are learning. These are certainly things worth a second or two to express your appreciation for. Watch people who regularly just toss off a head bob and come barrelling in without a thought for what they are doing.  Do they treat their partners in the same thoughtless manner?


The bows that open and close keiko, the training itself, are similar.  They are chances to express your appreciation for what the founder of the art you do, and all the teachers down to your own, are sharing with you. You’re not just going through a moldy old Japanese ceremony. That bow is a chance for you to think briefly about what practicing the art means for you and to express it through your action. If someone is watching, they should be able to tell that you care about what you are doing. You shouldn’t look like you are only doing it because you have to do it before you’re allowed to train. 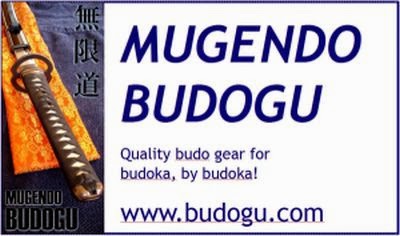 The other big piece of etiquette that is common across all Japanese arts is bowing to your teacher and training partners. I’ll be honest, it’s a lot easier not being Japanese in a dojo in Japan. For the Japanese bowing can be a carefully calibrated activity. How deeply they bow is dependent upon what their social status is relative to the person they are bowing to. This can get complicated fast, but the basics are you bow deeper the lower your status is compared to the person you are bowing to. So you bow relatively deeply for your teacher, deeply for her teacher, and very deeply for the head of your art In Japan people pay close attention to this, and many businesses will give new employees classes to be sure they are doing it right and won’t offend any customers.


Here’s a nice video of ladies in kimono demonstrating a variety of different bows that would be used when greeting people of varying social status, and doing so perfectly.


Not being Japanese or in Japan, we don’t have to worry about getting just the right angle and depth to our bow to express the precise degree of relative social rank. We should still bow with sincerity though. We can take the tenth of a second required to make it more than just a motion we go through and turn the bow into an expression of how much we appreciate what we are learning from our teacher. If we are bowing to a training partner, it’s a chance to show our thanks that they will let us train using their body. It is all too common for people to forget that our training partners are making a gift of their bodies. They are trusting us to train using their body and to not damage them while we are learning. That’s a huge gift and deserves a sincere expression of respect. Don’t make the bow perfunctory.


These are the major points of etiquette in all the budo dojo I’ve trained in. We bow when we enter the dojo. We bow at the beginning of practice and again at the end.  We bow to each person we practice with. Different arts will have a little more than this, but I can’t imagine any Japanese budo that will have less.


Many iaido systems include a bow to the sword at the beginning and end of training.  Considering that a genuine shinken is an extremely expensive work of art comprising the efforts of several master artisans, and that it should outlast any individual user by a thousand years or more, it seems appropriate to express respect and gratitude to the makers and to the instrument they created that we have the opportunity to train with for a short while. Some aikido dojo make a point of bowing to their bokuto and jo when they take them out and put them away. Many koryu systems have special bows for beginning and ending kata practice that show respect for the opponent and partner, but also a complete focus on them as a threat.


There are lots of variations on the basic theme of expressing respect and courtesy but the basic format of bowing into the dojo, bowing at the beginning and ending of practice, and bowing to your training partners never seems to vary. If you do this with clear and sincere intention to show respect and honor, and you sincerely strive to be courteous, I have found that people tend to overlook honest mistakes. If you are sincerely trying to be polite and follow the local etiquette, regardless of how new and different it may be, people will appreciate the sincerity and help you get the details right the next time.
It’s very easy to see when someone is not sincere about the etiquette, and people will treat you with the respect that you express in your etiquette. If showing respect in your etiquette is to much of bother for you, and you insist on slouching through it, people will take this as sign of your respect for them and what they do, and treat you accordingly.


First and always, dojo etiquette should be sincere. The formal etiquette serves serves many purposes beyond providing a way for people to show respect for each other but it is always about showing respect and appreciation. This is true even for those incredible, aggressive bows the koryu folks do. If you don’t show respect when you bow in with them, they are likely to let you know how they feel about being disrespected, and it won’t be a comfortable experience.


I only get to bow to my teacher a few times a year now, because I live 6000 miles away from him.  When I do get to spend time with him, I want everything I do to express my respect for him as a teacher, my appreciation for what he has taught me, and my love of him as a person.  There is no room for stiff, empty form with all that within my heart. Kiyama Sensei will be 90 years old this year, and I know that each visit could well be the last chance I will have to express these things to him. With all that feeling driving my etiquette there is nothing stiff or empty in the etiquette between us. Instead every bow and interaction is filled with warmth and appreciation.  I use all my actions to show my appreciation and respect.


Etiquette and reishiki isn’t about putting teachers on pedestals or for controlling students.  It’s about showing respect for the people you are learning from, the partners who are helping you to learn, and the art you are learning. There is nothing there that isn’t worth showing sincere respect for.  If you don’t sincerely respect your teacher, the people you are training with and the art you are practicing, you shouldn’t be there.  Budo etiquette is about showing everyone how much we respect, appreciate and honor what we are doing and those we are doing it with.
Posted by The Budo Bum at 11:40 PM

I am not training in a Japanese martial art right now and one of the things I miss is the etiquette.

I am training in BJJ and while the friendly open atmosphere is nice, there is certainly something missing.

Still, without appearing too odd, I carry on in my own way.

Interesting essay!
I train in koryu and we don't do those aggressive bows you mentioned :). The previous headmaster of our school wrote an essay regarding Budo Reigi, slight different take with many similarities

There is a nice example of a fierce koryu bow at the beginning of this Tendo Ryu naginata video.
https://www.youtube.com/watch?v=c1wmxgA5lP0

The Tendo ryu clip is mild comparing to Ellis Amdur's Araki ryu but I know what you mean :D.

sorry, mistaken for kiai. We do have fierce bows in our art. It works as a form of mental preparation.