Why Are You In The Dojo? 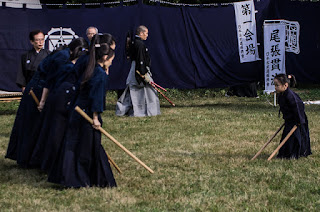 I had my technique ripped to shreds by a teacher the other day. He pointed out every little mistake, and he wasn’t the least bit gentle. There were no attempts to soften any criticism or to protect my ego. This was the epitome of “in your face” instruction. Every little point was picked apart and corrected with almost brutal efficiency and effectiveness.
A lot of people think this sort of instruction is abusive. That a teacher who does this is harming his students. That such teacher couldn’t possibly respect his students. Such a person has to be insecure to treat other people so harshly. That a student should stay far away from people like this. This kind of teacher is just an abusive jerk, right?

Wrong. While Sensei was ruthless in tearing apart my technique, he never once came close to stepping over the boundary into abuse or even being unnecessarily harsh. It was tough, and it’s not easy being on the end of that kind of criticism, but guess what? That’s why I was there. I’m in the dojo training so I can improve. I’m not there to show anyone how great I am or to prove I can beat someone, or to convince the world of anything. I’m there to learn.

If you’re serious about learning, the best way to do it is to have a very small ego. Take your ego and pride and desire for positive recognition and leave it with your shoes by the door. These things only get in the way of learning. Worse, pride and ego can be downright dangerous. The worst injury I’ve ever gotten was because I was too proud to admit my partner was a little better than I was. I pushed too hard and got injured because of it. It certainly wasn’t my partner’s fault I ended up in that position.

I have no problem with how this teacher does things in large part because I’m there for one reason, to improve. Sensei isn’t gentle, but I learn an incredible amount in a remarkably short time. I park my ego by the door and step into the dojo with no mental distractions to get between me and Sensei’s rapid fire deconstruction of what I used to think was pretty good technique. I’m there to learn and Sensei is not there to waste any time coddling egos. He is there to train.

There are lots of reasons for being in the dojo that just get in the way of moving further along the Way of Budo.  There’s the guy who’s out to prove how tough he is. Unfortunately, these guys (they are almost always guys) are only there to prove how physically tough they are. They have no interest in showing the mental toughness required to take real, harsh, tough criticism and tell Sensei “Thank you!” with sincerity.

Then there are the folks who are there to prove they are better than someone, or everyone. These folks only want to do the things they’re already good at. If they are working on their weak spots, no one can see how great they are. Their practice is all about themselves. You have to be careful because these guys are far more concerned with looking good than with taking care of their training partners.
People who come to the dojo just to play around and have fun are annoying because they don’t want to do the hard work of growing their skills and themselves. There is plenty of time for fun, and the dojo I love are rich with smiles and laughter. For all that, the best dojo are filled with people working hard to polish their techniques and grow their spirit. The laughter in the dojo is wonderful spice added to the rich stew of effort, sweat, concentration and dedicated training. Students who are primarily in the dojo for amusement aren’t really students, and they are a distraction to everyone around them. The world is full of places to amuse yourself and pass some time, but the dojo should not be one them. Just about anything that gets you to the dojo is a good reason to me.

I do think the above reasons are perfectly acceptable reasons for going to the dojo.  The point where things change is when you step onto the dojo floor. Once you’re in the dojo, there is room for only one purpose; to learn. The dojo is a place for studying the Way, through whichever particular path you have chosen. It’s not a place ego, for power struggles, dominance games, silly games or horsing around.

The dojo is a place for learning and if you are learning to prove you are better than others, or how demonstrate your personal excellence, or how to have fun, you’re learning the wrong lessons. Leaving your ego at the door with your shoes is a difficult lesson to learn, but it’s fundamental to everything else. If I couldn’t check my ego at the door, I can’t see any way I would be able to absorb all the lessons Sensei offers. I’d likely make the mistake of taking Sensei’s critique as a personal attack instead of as the effort to hammer the weakness out of me and my technique.

After all, budo isn’t just about learning fighting techniques, its’ not even mainly about learning fighting techniques. The techniques of budo are tools, but such tools are wasted in the hands of a fool. Teachers worry more about the mind and spirit of a student than about the technique. The mind is the most effective, efficient weapon there is. If you’re not training that in the dojo, what do think you’re learning?

Learning to leave your personal baggage at the door, whatever that baggage is, is one of the most important and most fundamental lessons in budo. It’s impossible to make real progress until you can do that. When your mind is filled with the baggage of ego, or dominance, even just amusement, there’s no room left for the lessons to be learned in the dojo. If the only things you’re learning are techniques, you’re not learning budo.

At the end of practice, what’s the best compliment you can get? Sensei walks up, slaps you on the shoulder and says “You worked really hard today.” That’s as good as it gets.  The Way doesn’t have an end. The real question is how we tread the path.

Labels: learning in the dojo, Why Train, wrong reasons

Thank you. This is a classic truth about any sort of learning.

Reminders such as this are always welcome ��

While I agree with this wholeheartedly, this would never fly in a world where microaggressions, triggers, and social justice warriors linger just waiting to for the opportunity to be offended.

Hi Peter, I love this post.
I believe that it’s also a lot to do with the relationship between you and your sensei, and his or her intentions. There is a huge difference between someone who says “that’s rubbish” because they are a mean person who likes to control and abuse students; and someone who says “that’s rubbish” because they want you to do it better, where you know that this person really cares about your learning and is out to push you, not hurt you.

and I also believe that one of the benefits of good training is to desensitise us to criticism, and teach us how beneficial it can be. Even criticism from people we don’t trust and/or who don’t have our best interests at heart can be useful, although we need to make a good assessment of which feedback we want to accept and which to reject (or in the case of a sensei, the trust we place in the quality of their teaching).

I do have one slightly strange question for you. How do you ensure that you are not feeding your ego by being proud of your ability to lose it? Does that make sense? For example, how do you stop thoughts such as “many other people couldn’t take such harsh correction and learn to this level, but I have a level of mental toughness which they don’t” or “The best way to train is to leave your ego at the door. And I am great because I know how to do that!”

This is not to be provocative in the slightest, just interested and would love to hear your thoughts . . . ?

Hi Kai,
Thanks.
The pitfalls related to our egos are endless. One of the key tells is that if you are being effective at leaving your ego at the door, you don't notice. If you find you are congratulating yourself for how well you do it, you know you have more work to do. It's definitely not easy, nor is it something that happens all at once. It's a gradual development where we get better and better at it, and notice our ego interfering with our training less and less. At first it's mostly noticing our ego getting the better of our training and consciously pushing it away.

One very surprising (to me anyway!) piece of advice I had was from an aikido sensei last year (he is not my own sensei). I do tend to be very self-critical, which I guess I always saw as a good thing in a way, as it makes you drive yourself harder? Also it means you are being modest and not arrogant? But he said (via email): "I would recommend avoiding self-criticism, just feel happy that you are always doing your best. The basis of self-criticism is the ego, and it is the ego that inevitably gets in the way of letting aikido work through you".

Still not certain I fully get what he means, as how can you learn without being demanding and critical of yourself? Although I do understand that he is talking about mindfulness and just being in the moment; not constantly worrying about how you are "performing".

Very good read, even though I think Ego is good, the "I know them all" attitude is the killer.
I am strangely agreeing with what was said by that unknown Sensei. Enjoy what you do today better than yesterday and tomorrow you will be better than today. The small steps theory.

Thanks Draven, I really like the way you have rephrased that!

illuminating. I had the wrong goals all along. Great post sensei!

To Unknown,
I wouldn't say you had the wrong goals all along. Whatever got you started, got you on the path, so it couldn't have been all wrong.

Grateful to have read this...I am pondering my intentions for wanting to start a budo art...