Nin (忍) is a Japanese term that is not often heard standing alone. Outside Japan it is most commonly encountered in the term ninja (忍者).  Nin has nothing that directly ties it to spies and assassins though. Nin is a character trait that may be the most important generic lesson in classical budo. Every ryuha has its own essential character that makes it truly unique: they all teach nin.

In dictionaries nin is usually translated as “patience”. Patience nails a piece of the character nin (忍). As with so many things though, to simply say “nin (忍) equals patience” is to miss a great deal. Nin is not regular patience, but the patience that quietly endures suffering and trials.

There are the obvious trials in budo, like how much your knees and feet ache from doing the first iai kata for an hour, continuing even after you’ve worn the skin off your knees.  Or the never-ending torture that is the posture known as tatehiza. Learning to endure physical discomfort with quiet stoicism is the beginning of nin (忍). Anyone who sticks with budo for any length of time learns to do this. It’s just part of the physical territory. Everyone in the dojo hurts and no one is interested in hearing you whine about it. Everyone went through the pain of learning to take good ukemi, even if taking ukemi for Sensei can knock the wind out of you.  That’s the physical side.

The other side begins when Sensei says “Shut up and train.”  In that moment it becomes time to patiently endure not just the discomfort and stress of training, but also your own curiosity and desire for answers. This is the time when your questions will only be answered by your endurance of training with doubt and misunderstanding and ignorance that gnaws at your heart. I come from a background where I was taught to always ask a question if I didn’t understand something. Ask a question and get an answer. In budo though, most often the best answer to a question is not an explanation, but more training.

It took me years to understand that my teachers were trying to tell me that the answers to most of my budo questions were to be found in training, study and contemplation. I asked Hikoso Sensei about foot sweeps in judo one evening, and I can’t imagine a more rudimentary answer. I was looking for a deep explanation of the timing and how to understand it. He showed me the proper way to move my foot when sweeping.  That’s it. The answer was that I needed to train more to understand the timing.  No amount of explanation would ever give me that. I had to put up with not understanding the timing until I did understand it, and I had to to do it knowing there was no guarantee that I would ever get it.

Nin is about patience where you hold your tongue even though the most satisfying thing in the world would be to respond to someone’s unkind, callous or outright mean comment with a righteous comeback. Wisdom, discretion or simple maturity demand that you let it go. Without escalation, there will be no conflict.  Without nin no one would have been able to abide by the rules laid out in so many keppan (training oaths) not to engage in fights and duels until you mastered the art. If you wanted to keep training with Sensei, you had to master your emotions and learn to forebear not just the little slights, but the big insults as well. Once you joined a ryuha, everything you did reflected on the ryuha. If you got into trouble because you couldn’t hold your tongue or control your anger, it could bring the wrath of the government down on everyone in the dojo.

Nin continues to be an important component of what makes a good person in Japan. From the salarimen trudging through their endless days or the school kids spending their days in regular school and their evenings in cram schools dedicated to getting them into even more rigorous high schools and colleges. Nin can be seen in today’s dojo in Japan in the near complete absence of talking during keiko. Everyone is focused on the training. Talking is something for elsewhere. In kendo dojo it may seem like there is too much yelling going on for conversation, and in an iai dojo the quiet can be complete except for the swish of
a sword through the air.

Nin is sitting in seiza with a smile while sensei forgets that everyone is in seiza and launches into a long story. Nin is sitting in tatehiza with the appearance of relaxed comfort. Nin is mastering present desires for long term ends without letting anyone know about the desires or the ends. Nin is the quiet patience and endurance of the mature martial artist.

Special thanks to Deborah Klens-Bigman, Ph.D. for editorial support.


If you enjoy the blog, get the book! 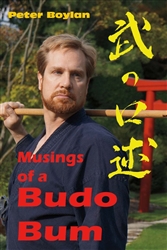