This is my teacher, Kiyama Sensei. He was the watching the enbu at the beginning of the Shiga Taikai. It was 35C (~95F) that day. I was genuinely worried he would get sick from the heat while wearing the full, formal montsuki. 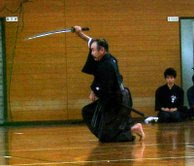 Yeah, the picture is dark, but I haven't figured out how to lighten photos yet. (Chuck fixed it for me. Thanks Chuck). It is a demonstration of Muso Shinden Jushin Ryu. Yes, you've never heard of it. Yes, it is a branch of Muso Shinden Ryu. No, it is not just like MSR. It is quite different, with some unique kata of their own, and a chiburi I have never seen anywhere else.
Posted by The Budo Bum at 11:28 PM 4 comments:

A lot of people are intimidated by the idea of the martial arts, some seem to be downright scared of them. I used to think that this was because the martial arts (all of them, western and eastern) deal with conflict, and conflict makes people uncomfortable. I've decided that idea was going in the right direction, but missed the target.

Martial arts frighten people because they're about power. Personal, physical power. People are also scared of knives and guns, but at least a knife or a gun can be taken away from someone and then they are the same as everyone else. Martial arts skills can't be surrendered at the desk when you check in. They can't be detected by metal detectors or chemical analysis or even the new back-scatter radiation scanners. You can't take them away from the artist. That scares a lot of people. The idea that a person can have this power that can't be seen or detected or surrendered is frightening to many people. I've had bosses and co-workers treat me very differently from everyone else around, and the only reason I can come up with is the martial arts.

I've been doing martial arts for so long now that I have difficulty remembering what it's like to not do them. I keep trying to imagine how non-martial artists view me, but it's difficulty. The only ways I can imagine it is to think about how I react to someone who carries a visible weapon like a bowie knife or a pistol. It's rather unnerving to imagine that people who know I do martial arts think about me the same way. Do I scare people? Or better, are people scared of me?
Posted by The Budo Bum at 6:40 PM 2 comments: