Classical Budo Connects The Past And The Future


I was reading one of Ellis Amdur’s essays his excellent book Old School, in which he was discussing the Higo Ko-Ryu, an ancient system of naginata. Towards the end of the essay he talks very briefly about how “dedicated practice would allow one to ‘become’ someone from the 14th or 15th century.”

Can you really learn to embody not just movements, but something of the thinking and feeling of a different time through studying a koryu budo? Few koryu budo go back to the 14th century, but arts that may teach you how to think and move and embody the spirit of a person of the 16th and 17th century are not difficult to find.


Koryu budo have always been intended to train practitioners to embody a particular spirit. It is a world far removed from the idealized images of honorable samurai that comes to us through stories and movies. The various ryu and styles were created at many different points in history, and many still maintain the spirit of the world when they were born. The most commonly practiced tradition, Eishin Ryu (whether you train the Muso Jikiden Eishin Ryu branch or the Muso Shinden Ryu branch, it’s Eishin Ryu), goes back to the 16th century.   Mastering the art requires embodying a way of thinking and moving that hasn’t been “appropriate” for at least 200 years. Some of the Oku Iai kata probably haven’t been considered appropriate for more than 400 years.


It’s not easy to imagine a time when hiding under a porch to ambush your enemy was so common and acceptable that someone was teaching important points for how to do it in a kata. Yet this is exactly the world that Eishin Ryu evokes through its kata. The Oku Iai kata are the oldest in the system. They strongly evoke the rawness of a century filled with civil war, double-crossing factions, assassination, and simple murder. Actions that don’t seem very honorable to us now.


This is the world we are trying to connect to when we train, though. One of the core benefits of training in these old styles is that they take us out of the world we live in and and give us the chance to look at ideas and actions from a very different vantage point. This is as true for Japanese students of koryu as it is for anyone else. The world has changed so much in the intervening centuries between the founding of the koryu and our entry into the schools that they represent worlds where we are all strangers.


Each koryu comes from a different time and place in Japanese history, and this contributes to the very different flavors and feelings they each have. Through study and practice we get to taste those places and times. This is an easy thing to say, but doing it takes dedication and effort. What we experience reaches back to what the founders of the arts felt was important and critical enough to pass on.


Through practice we can discover the elegant and subtle philosophy of Yagyu Munenori’s Shinkage Ryu kenjutsu. Yagyu Munenori was a ranking nobleman who taught kenjutsu to the highest levels of Japanese society, and his art reflects this. His book, Yagyu Heiho Kadensho is still read and studied.  Arts like Eishin Ryu and Araki Ryu were the work of low level soldiers, samurai who quite often were as much farmer as warrior. Their brutal, rugged arts reflect their world and way of life. Between these extremes are all the other koryu arts created over the 500 years from founding of Nen Ryu (roughly 1368) until the end of the Tokugawa Shogunate in 1868.

What are you interested in learning? What do you want to experience? The art you choose will teach you about a lot of things, and bring you face to face with ideas and experiences that may shock you. Some iai sword systems include kata for acting as kaishaku, the person who stood by when someone had to commit seppuku (ritual suicide as penance). The kaishaku’s job was to insure that person died quickly and cleanly after he cut his belly open. Could you imagine doing this for a friend?


The lessons koryu teach about the world they came from are rich and deep, and sometimes disturbing. The lessons taught in koryu are not just martial skills. Within the kata are embedded clues and ideas about the nature of the world their creators lived and fought in, and the things they felt were important to teach.


Koryu budo are replete with little lessons like how to move through a crowd while wearing swords, how clothes can entangle and encumber. How to address and behave towards your seniors and your juniors. All the details of practice serve to pull you back to the world of the people who founded the art you study.  It takes courage to face everything a koryu bugei offers. Students have to work and push themselves beyond the world they live in, and the journey is not always fun. Who really wants to imagine what it’s like to behead a friend to save them from a slow, agonizing death? Or plan and complete an assassination?

These activities were all part of the world these arts were born in. To practice such  a system is to partake of a living part of that world. This was how people trained themselves to live then, to organize their minds and coordinate their bodies to deal with possibilities that were too likely to ignore. As we practice, we learn not just the shapes and forms of the movements used, but the way of thinking necessary to make those shapes and forms effective.


Ultimately, budo trains the mind as much as the body. Training in a koryu means stepping beyond the way of thinking and operating in the world where we exist and reaching back to learn something of how people not only fought, but thought and acted; and what they valued ages ago. Many of the lessons seem far removed from the world of 21st Century USA that I live in. The longer I train, the better I am able to adapt my body and mind to the core of the movement, thought, and intent required to successfully execute the training. The closer I get to reaching the core of the training, the more I realize that forms of movement are hundreds of years old but the mindset and thought are alive and part of the world I live in as well.

Special thanks to Deborah Klens-Bigman for help editing and pulling the idea together. 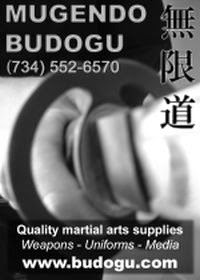 Good Budo Is Simple. That Doesn't Mean It's Easy.

I had a conversation with one of my Shinto Muso Ryu students that was interesting. He was having a common issue with a core technique. He was trying to make the technique unnecessarily complicated. The technique (in this case Maki Otoshi) is difficult enough without making it complicated.
Good budo is simple. Every koryu I’ve had a chance to work with at all has been extremely simple.  Shinto Muso Ryu has 12 fundamental techniques. The more I practice and study them though, the more I believe there are only 2: a strike and a thrust.


The Shinto Hatakage Ryu Iai I do comes down to drawing and cutting. Even the defensive movements such as suri age and uke nagashi are applications of the fundamental mechanics and principles of good cutting. It doesn’t get much simpler than that.  Cut down. Reverse the motion and suri age. Maintain the relationship between arm, hand and sword and move it to the side for uke nagashi. They are all one.


Kodokan Judo has an impressive list of techniques: 65 throws, perhaps a dozen strangles, and a number of arm locks. They all manage to express the principle of 精力善用, or “maximum efficiency minimum effort” as it is most commonly translated. The throws, all of them, from big throws like seioinage and kata guruma to subtle foots sweeps like  de ashi harai to the seemingly impossible uki otoshi all rely on the principle of kuzushi. The more I study, more I see kuzushi as a simple thing, rather than many different movements I was taught for achieving kuzushi when doing various throws.


Good budo is always simple. I can do all of the jo kata from Shinto Muso Ryu in about 20 minutes. The iai kata of Muso Jikiden Eishin Ryu can be done in a similar amount of time. The kenjutsu kata of Muso Shinden Ryu can be done in about 10 minutes. There is nothing complicated in any of them. Iai kata are all “draw and cut” or sometimes “draw and cut several times.”  Jo kata, no matter how advanced all come back to those 12 fundamental techniques.


A good question to ask is “Why is good budo always simple?” Simple has several advantages. First, it’s easier to teach and learn. For iai, if you only have one grip on the sword, and you always use the sword the same way, you can learn it much faster than if you have multiple grips and a variety of ways to handle the swords in different situations.


Simple is smoother and more stable. Short, simple, uncomplicated actions are smoother to carry out and leave less room for mistakes. Complexity creates weak points. If I’m doing sword and I have to repeatedly change my grip I create an opening every time I have to change my grip. There is a moment during each grip change when my control of the sword is weak because I have to let go to make the change. If my opponent attacks at the moment there is nothing I can do since I don’t have a solid grip on my weapon, and she will defeat me easily.  The same goes for footwork.  Judo footwork is stunningly simple and uncomplicated. We avoid doing anything complicated that involves crossing our feet. The whole time our feet are crossed, we are standing on one point instead of two, making us unstable and vulnerable.  Complex is weak because it has many connections or joints where it can be attacked. Simple is stronger because it has fewer suki, openings, to attack.


Good budo is based around a few basic principles and movements that can be deployed in an exceptionally broad variety of situations.  Good budo almost never focuses on principles or movements that can only be used in a very few situations. The focus is on making the broadest possible use of the fewest learned movements. That makes each system much more efficient and effective.


Complex techniques open up another set of problems. Every additional step required for a technique multiplies the opportunity for making a mistake by an order of magnitude. The best techniques are as simple as possible, creating no extra space for mistakes and getting the job done quickly and efficiently.


As my student was discovering though, simple does not mean easy. It takes a lot of work to develop the most fundamental skills. For me, the most difficult technique in Kodokan Judo is the first technique from the first kata people learn, uki otoshi. After 29 years, I finally feel like I’m beginning to understand it. It’s as pared down and simple as a technique can be. It’s also as difficult to do right as anything I’ve ever tried. My version of Occam’s Razor is “The simplest budo is the best budo.”