Practice in Japan has a different feel from training in the U.S.. In Japan, everyone is quietly intent on the training. There is no chatter, and not even much in the way of questions to Sensei about how things should be done. Keiko proceed with a smooth regularity. Everyone except the newest students knows how practice in their dojo operates, and they all work to make sure everything goes smoothly. This is not to say that everyone is already perfect - far from it. Everyone in the dojo is there to learn and train hard. Training time lacks the social element that is often present in dojo outside Japan. There is no extraneous conversation while training is going on. Before and after practice? Of course. During breaks? Sure. While actual practice is going on? Not at all.


It’s not that anyone is yelling or enforcing silence. Everyone is there for a reason and a purpose, and during practice they focus on it. No one has to tell them to focus. It’s not like the pseudo-military atmosphere I’ve seen in some dojo outside Japan, with the instructor acting as a drill sergeant, yelling at anyone who isn’t exactly in line. In most Japanese dojo, the discipline comes from within the students themselves, not from the teachers. I would be mortified if I were to be so out of line that anyone, fellow student or the teacher, felt a need to say something to me about my behavior.


Practice moves along at a rapid clip. Dojo in America often have a lot of chatting and talking among students, or at the other end, a rigidly enforced atmosphere of silence. Traditional dojo in Japan are quiet and focused, but lack the authoritarian feel of many large, modern dojo. You don’t see a lot of external discipline. Students are expected to know how to behave politely while they figure out the dojo customs. Teachers expect to be able to be heard and lead class without yelling.


For example, Iseki Sensei leads the jodo class, and everyone takes turn in the counting of technique repetitions while we’re working through the kihon (fundamentals) at the beginning of class. Sensei speaks loudly enough to be heard by everyone in the dojo, and no louder.

Once we finish with the kihon, Sensei splits us into senior and junior members so the seniors can act as partners for the junior students. This is something I don’t see enough of in modern dojo. The seniors use their understanding of timing, spacing and control to help the juniors get the most out of their technique and kata practice. The senior adjusts her speed and intensity to a level where the junior can practice and learn. The senior doesn’t spend much time talking to the junior; they are both focused on the training. If significant corrections need to be made the senior will make a brief comment, but that’s all that’s needed.


The teacher lets the students practice without a lot of interruption. Rarely will the whole class be stopped to make a point. The teacher will correct individual issues individually, and the rest of the class will wait for the pair being corrected to get back on track, or continue working on kata if the correction is taking more time than usual. Working with the juniors is not a sacrifice for the senior students. They are also working on the spacing, timing, and control for the tachi side.


Practice gets more interesting when Sensei has the junior members of the dojo sit down to watch while the seniors work together. This practice is intense, with the seniors working at the edge of their skill. The juniors don’t chatter while watching. They’ve learned well how to quietly observe somewhere else. They don’t have to learn that here. The seniors will all be working on different parts of the curriculum, as directed by Sensei. Sometimes Sensei will step in and act as the partner so the student can focus her  practice on a particular point. 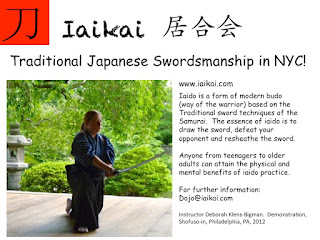 Through all of this the only time Sensei will yell is when he calls for a break. Most corrections are made at a conversational tone by Sensei. If one senior is helping another, the corrections are usually made at a whisper so as to not disturb anyone else’s training. The whole atmosphere is one of intensity and focus on learning. Even the juniors sitting at the side are quiet and focused on picking up as much as they can from watching the seniors practice. There is plenty to learn that way about footwork, timing, rhythm, and all the other details of the art. There is room for smiles and quiet laughter at mistakes and accidents.  Then it’s back to practice.


Talking would disturb everyone else in the dojo, and the last thing anyone in Japan wants to do is bother someone else. This doesn’t mean the dojo isn’t friendly and social, because all of the traditional dojo I’ve been in have been friendly and social. The students just recognize clear distinctions between training time and social time. The “friendly” is always there. People are genuinely concerned about their partners’ well-being. When training is over, people are very social. There are questions about how people are doing, jokes and laughter.  Often there is time for a drink together after training.


That’s after training. During training everyone trains. No one chatters or talks other than necessary. They just train. The focus is quite different from dojo I’ve been to elsewhere. Everyone shares the focus.  This is something I need to bring to the dojo where I train outside Japan.
Posted by The Budo Bum at 12:01 PM

Thank you for sharing this very interesting perspective about in a traditional dojo.

A new year promise
I WILL travel to Japan to train, sometime.
Than You Peter for all Your blog posts